Since buying a Man of War cape, I’ve been experimenting with the best way to achieve that screen used look. I believe that the colour and material is spot on to the real cape. The only difference is that one is box fresh and the other was probably well used in an army barracks 30 years previously. 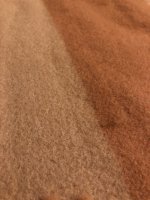 The MoW wool cape is very fluffy and soft. The first thing I did was to wash it to stress the fibres. I washed it gently at first but ramped it up to a standard wash in the machine. Be warned though that this will reduce its size slightly.

I then shaved it with clippers and then a razor blade to reduce the fluff. This cuts it down to a threadbare finish adding years of wear to the surface. It also thins the material which helps it to drape more easily. 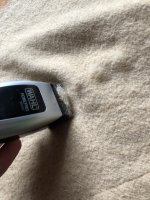 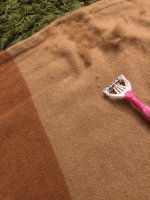 You can already see that the weave is more prominent and the stripe contrast is sharper. One final technique I used was to flash the surface with a kitchen blow torch. This takes off any loose fluffy edges that the razor couldn’t quite get to. Be prepared for the smell though. 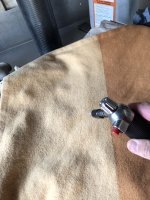 After all that, you should have a woven wool cape that looks and drapes like the screen used one. The final photo is my cape draped over a roll of tape on the back of a chair to simulate a Fett shoulder pad. 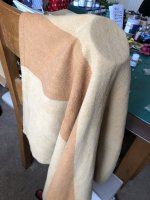 Staff member
Wow! Thanks for posting. I definitely like the look of the cape shaved compared to how it comes. Might have to give this a try.

thanks for tip!!
M

Shaving is always a good idea!