I am excited to share that I was fortunate enough to find a lead (through a coworker, who's wife works at the Marin IJ) and track down an original copy of the Independent Journal cover from September 25th 1978. Via the connection, an archivist was able to locate the microcell and then scan it for me.

This is the cover that captures the first published photo of “Boba-Fet” and documents his first public touring appearance. This costume went on to became the most used touring costume based on the photographic evidence we have.

It started off its life in the UK as a Supertrooper prototype costume and then made its way to San Anselmo, California for the demo at Park House. 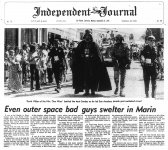