I have started working on some ESB templates. The first one I have completed is the shoulder armor for the left side.

Instructions:
All you should have to do is print it out and cut it out if you have Fett Pride armor.

Method:
I used paper to trace the shape of the Fett Pride shoulder armor and then scanned it at scale and used Photoshop to trace and create layers of damage based on photos. I then printed it out and made some adjustments based on comparing photos at the same angle. Then repeated the process. I am happy enough with it to post it. 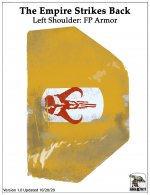 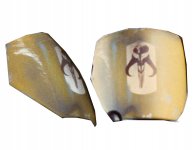 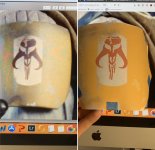 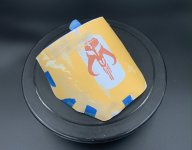 well done. beautifully executed. I could be crazy but I see those chipped paint areas as gray or underlit silver. Am I seeing things?

Ord Mantell said:
well done. beautifully executed. I could be crazy but I see those chipped paint areas as gray or underlit silver. Am I seeing things?

Very possible. Maybe base coat silver that has been toned down with some grey misting?

It's definitely up for interpretation. My gut instinct is its silver. It looks gray because the light on it is diffuse rather than direct. Also, there is no gray chipping anywhere else on the armor. That doesn't mean it can't be of course, since Johnston's guiding principle on the paint job was to make it look like the character grabbed armor from different sources at different times while also having been painted over multiple times so that one piece wouldn't necessarily match with the rest. But for the most part, where paint is chipped and is not another color of paint, it tends to be silver, not gray. That's my thought. There are places where there is gray, but it tends to be on top, as a overspray or splotch rather than chipping. The ESB helmet is an obvious exception that, so I could be completely wrong. My wife would say I am wrong just on principle, so there's that. 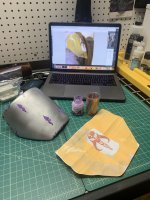 Staff member
My damage up top could have been more accurate. Next shoulders I do will be better! 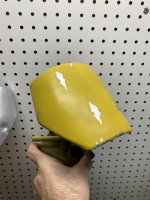 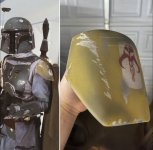